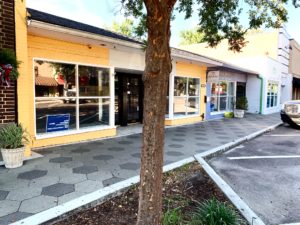 A public hearing for an Administrative Deviation for parking for the proposed Southern Grounds Avondale will be held Friday, August 23 at 10:00 a.m. at City Hall, 117 W. Duval Street.

The proposed deviation seeks to:

“Riverside Avondale Preservation supports the entry of Southern Grounds into The Shoppes of Avondale,” said Warren Jones, executive director.  “At the same time, we remain committed to balancing the needs of existing retailers, restaurants, and adjacent neighbors, many of whom have parking concerns.”

Southern Grounds is proposing a 163-seat restaurant in their 8,700 square foot building, which will have floor space of approximately 7,000 square feet.  Some of that space will contain retail. As a result of the existing parking deficit in the Shoppes and surrounding residential streets, as well as concerns from existing merchants, RAP advocates for a 128-seat restaurant. This number is based on the equivalent seats allowed by the vested parking spaces accorded to the previous retailers in that space, along with the four new spaces behind the building.  This size restaurant can be respectful of not squeezing out more retailers, and also the safety and quality of life for residents on the nearby streets.

RAP also advocates for a more comprehensive employee parking solution and would like to recognize the group behind Southern Grounds for working with RAP, The Shoppes of Avondale Merchants Association and several restaurants and retailers by bringing in a consultant to help develop an off-site employee parking solution. That solution is in the initial planning stages.

The Planning and Development department staff report recommends approval with no conditions.  RAP’s view is that the report is inconsistent with prior Planning Department reports for area restaurants, omits reference to the 2014 Shoppes of Avondale/Park and King Parking Study findings, and doesn’t recognize the addition of 400 restaurant seats since the Study was conducted.

RAP sent a letter to Zoning Administrator, Sean Kelly stating our position, referencing the existing parking deficit, and urging the lower 128-seat count as a solution that would respect existing retailers and nearby residents, and which is also provides a rationale grounded in the zoning code. To read the letter click here.

Anyone who wishes to comment on the issue may attend the public hearing, and/or write to Sean Kelly at skelly@coj.net with a copy to Folks Huxford, fhuxford@coj.net.

A property owner is planning to bring Southern Grounds and two retail shops to the Shoppes of Avondale.  The owner is seeking a Certificate of Appropriateness (COA) to build a new storefront building for the restaurant and retailers, which would mean demolishing the existing non-contributing structure (meaning not historically significant or protected).  The owner said they will also seek an Administrative Deviation (AD)  for 26 parking spaces (not giving owner credit for “vested” on-street parking and 4 employee spaces being created at the rear of building), which would serve the new 8,700 square foot building.  Southern Grounds coffee shop plans to have 187 seats, operate from 6 a.m. to 10 p.m. each day, and serve beer and wine but no liquor.

Riverside Avondale Preservation met with the applicant and does not oppose the building’s demolition provided there is an approved COA for the new building to be commenced immediately, along with adequate accommodation for adjacent retailers and pedestrians during the construction process. The new building design will go before the Jacksonville Historic Planning Commission in either the July or August meeting.

The application for Administrative Deviation will go before the Zoning Administrator but the application has not yet been filed, so a date has not yet been set. Parking will be an issue, and RAP thus far has advocated for the owners to bring an offsite parking solution to serve employees at a minimum. RAP feels that this kind of solution is strongly needed in the Shoppes of Avondale, as the need for offsite or alternative employee parking was identified in prior parking studies.

Southern Grounds is a popular coffee shop with locations in San Marco and Neptune Beach.