Saturday, June 11 I All Day Long

The countdown to our city’s bicentennial has begun. But let us first take a step back in time to set the stage for our commemoration next year.

Jacksonville’s name appeared first on a petition dated June 15, 1822, addressed to then U.S. Secretary of State John Quincy Adams asking him to designate “Jacksonville,” in the U.S. Territory of Florida, as a port of entry. Sixty-one residents of the St. Johns River signed the request. Adams denied their petition, but after that, the name “Jacksonville” began to supplant previous references to “the cow-ford,” or “cowford.”

It would be nearly ten years, in February 1832, before the territorial legislature granted a local government charter to Jacksonville. But the development of Jacksonville, by people using that name, began in June of 1822, so that is the date and evidence that historians cite as its founding.

The event is scheduled to begin at James Weldon Johnson Park and will end at Riverfront Park (former site of The Landing). To see the full schedule of events and registration, click here.

The Post Street Dock is almost complete! We hope you will celebrate with us and Councilwoman Randy DeFoor with a ribbon cutting ceremony on June 30 at 4pm.  Afterwards, a ticketed boat trip led by the St. Johns River Taxi will highlight the many new docks and waterway improvements in our downtown that make reaching Riverside and 5 Points even more accessible without a car.

Did you know you can bring your bike on the water taxi? Ortega residents can leave Lake Shore Marina with your bike, get dropped off downtown, cruise through Memorial Park for beautiful views, have lunch in Avondale, and ride home for a wonderful round-trip. This is a care-free way to enjoy our community. 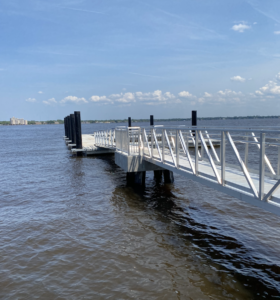 First Fridays are a RAP tradition. We seek to support small businesses, celebrate the work of our fantastic partners, allow members to meet other members and - your neighbors!
Join us to wind down and kick off the weekend during this monthly event and support those who make our neighborhood all so special while gathering with friends and neighbors. We'll have food, drinks and music for everyone to enjoy.
This month, we'll be setting up at Burlock & Barrel where there will be complimentary tastings for guests as well as cocktails and bottles for sale. The Burlock name has a long standing history in the Jacksonville community dating all the way back to the Prohibition era, starting back in 1920s. Taste their high-quality whiskey that comes in three signature flavors - B&B Reserved Aged Bourbon, Whisper, an aged and un-aged rice whiskey and Whim, a white corn whiskey. 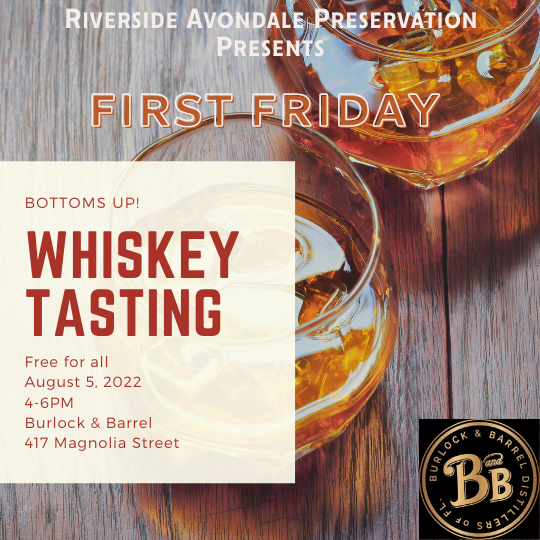 FIRST FRIDAY - A monthly meet up featuring food, drinks and live music at a local business.

Every First Friday on the Month, up to 100 participants

LUMINARIA - Luminaria brings neighbors together as they walk along candle-lit sidewalks to socialize with friends.

GARDEN TOUR - Draw inspiration from a variety of gardens in the historic district. From manicured landscaping to wild and natural, there are gardens for all tastes.

You don't have to live in our neighborhood to support our work!

Learn more about the history of Riverside Avondale and take a tour of the neighborhood with Go Tuk'n.