Paul warns about the use of closed-cell styrofoam for insulation or building blocks.

Paul gives an overview of a few of the many things to know about prevention. 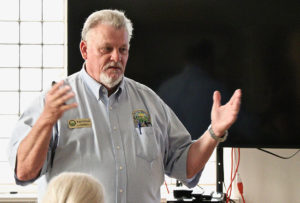 After learning more about Formosan Subterranean Termites at a Riverside Avondale Preservation workshop we believe a better name for the creatures would be, Ferocious Voracious Varmints.

A group of University of Florida scientists called the Formosan, “one of the most destructive termite species in the world today. In the United States it causes tremendous property damage resulting in enormous treatment and repair costs."

It is sometimes referred to as the “Super Termite” in their booklet called, “Pests in and around the Southern Home.”

Paul Mitola, Environmental Consultant with Florida Department of Agriculture and Consumer Services provided an hour of information regarding the most potent of the winged-wood eaters to a packed room at Riverside Presbyterian Church. Paul knows his termites. He is currently involved with the Pest Management University, a training facility in Apopka, Florida as an instructor.

Formosan Termites are native to China. They live in hidden habits underground where they find the moisture they need to survive. It is during the warm, humid nights of April through July that they come out to swarm around lights. That is why Paul recommends using yellow bug lights outside.

They eat anything wood based. And, they eat it fast.

During the presentation he gave the latest information on prevention methods. For existing buildings the options include trenching or drilling a chemical treatment to the foundation, adding a treatment in to walls and voids, or bait systems which require an active baiting termite contract with a pest control company.

“The most important thing is that you have a contract and your contract covers Formosan Subterranean Termites.” He also recommends checking the background of the pest control company through either The Better Business Bureau, your neighbors or call the Department of Agriculture at  (850) 617-7997.

One key to prevent a Formosan invasion is the reduction of moisture in and around your home.

The best way to know if they are near your home is to watch out for “mud tubes,” approximately an inch-wide bump in dirt. “Always be on the look-out for the “mud tubes” that indicate the presence of Formosan Termites,” Paul said.

But because people use lots of mulch around flower beds next to their home that can be hard to do.

“People use lots of mulch, so they cannot see mud tubes,” he said. The termites are also attracted to the mulch if it is made of wood.

Are rocks better? “Not necessarily because they hold water longer. Anytime you are holding water against a structure you are creating conditions that are conducive to termites,” said Paul. He believes 18 inches is best distance between the wall and plants. However, uncovered dirt is best way to see the mud tubes.

To make sure there is little moisture near your home Paul recommends the landscape be graded so water flows away from the wall. All pipes and splash pads should lead water at least one foot from the wall. Also, keep gutters clean and tree limbs trimmed away from the structure. Finally, repair all leaks and ventilate the crawlspace.

As for the structure itself, Paul recommends that wood or siding should not make contact with the ground. Keep stucco and exposed wood six inches from soil.

A new method of home construction could also be a big attraction to the small bugs.

It is very important, he said, to repair cracks and holes in the structure’s foundation. Any hole over 1/64 of an inch will allow an invasion.

“These termites are relentless,” Paul warned. “They will find any little gap to go through.”