Ascension- St. Vincent’s HealthCare has filed a Planned Unit Development (PUD) zoning application to implement new branding and signage at its Riverside campus. The new PUD will replace the original 1990 PUD and several minor modifications done since then.

RAP supports the overall PUD but has requested that comparable definition be included from prior legislations so that the agreement is clearer as to the prior provisions. There is a complex legal history going back to before the 1990 PUD, and the new building changed certain provisions specific to that parcel, so the updating of this PUD is more than just the signage.

Working with residents, RAP is requesting a condition related to parking be included. Residents of Villa Riva have communicated concerns to Ascension and RAP about parking issues relating to St. Catherine’s and Stockton Street. In addition, St. Johns Quarter residents have expressed concerns about the hospital’s remote parking lot “A”, located at Goodwin between Riverside and St. Johns Avenue, which is often full, resulting in hospital parking occurring on residential streets.

Ascension has expressed willingness to make some changes to address the concerns of residents. It is RAP’s goal to gain agreement that can satisfy both the residents and Ascension.  This would mean having a specific parking condition adopted in the ordinance, and also to include a parking exhibit similar to the exhibit that was in the 1990 PUD. Additional details from the prior provisions have also been requested for clarification.

For future development, it should be noted that the Ascension St. Vincent’s campus is not a part of the Historic District, so Historic District guidelines do not apply. However, with this new PUD, the property will be governed by the Riverside Avondale Zoning Overlay for items not specified in the PUD.

“The former PUD was in place 30 years, and the new PUD may be in force for several decades, so it is important to be complete, accurate and clear,” said Nancy Powell, board chair. “One of RAP’s roles is to consider the long-term implications of legislation, communicate to the community, facilitate ways to address issues, and advocate for measures that allow neighborhood compatibility. We hope to get clarity such that the public can understand the provisions in the PUD and that they are of sufficient detail to avoid future confusion.”

Ascension is located at the heart of the Riverside Avondale neighborhood, and the health care organization is a very important part of the community. RAP fully supports Ascension St. Vincent’s as a valued member of the community and we are excited to see the new rebranding effort come to fruition.

Anyone who wishes to comment on this legislation may attend the public hearing, and/or write to Council Member Danny Becton, chair of the Land Use and Zoning Committee, (dbecton@coj.net), and/or to Council Member Randy DeFoor (rdefoor@coj.net). 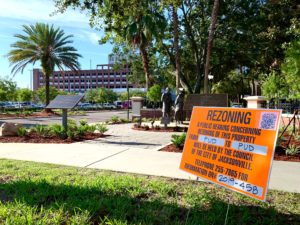 The hospital will be known as “Ascension St. Vincent's Riverside” and an extensive signage package has been submitted. RAP worked with Ascension on the signage package and appreciates that they modified their plans to respect and maintain the size, scale, and illumination of the existing signage visible from the street.

St. Vincent’s campus is within the Riverside Avondale Zoning Overlay, but is not a part of the Historic District so plans do not go before the Jacksonville Historic Planning Commission (JHPC).

After the review of the signage package the attorneys for Ascension informed our Zoning Committee that the PUD submittal will actually be more extensive than just signage since it is meant to supersede all prior PUDs. RAP has requested a detailed and updated site plan that outlines the existing state of the campus including actual and allowed heights, setbacks and actual parking spaces associated with the parking ratios. RAP does not feel that there are any issues with their current plans, however, the PUD application needs to accurately capture all important information on a site which has seen many changes in facilities and zoning legislation over several decades.

The public hearing scheduled for the PUD application (2019-0458) begins with the Planning Commission on August 22 at 2 pm at 117 W, Duval St., 1st Floor, Lynwood Roberts Room. That hearing will be followed by City Council public hearing on August 27, Land Use and Zoning (LUZ) Committee on September 4, and the Council Vote on September 10.